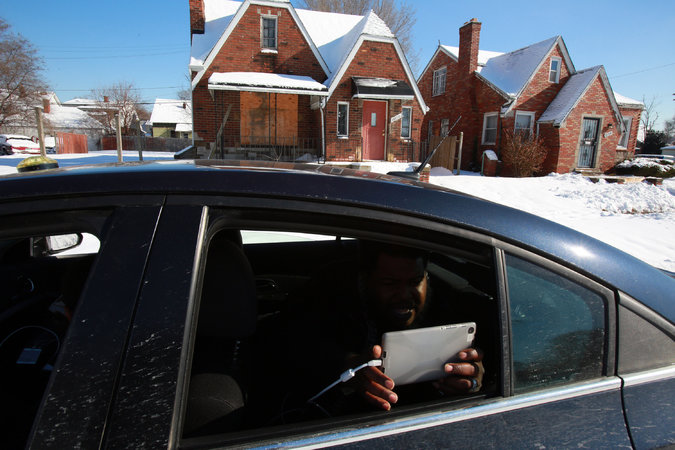 So many articles (and a dissertation) to write about Detroit, so little time. Meanwhile, the New York Times’ Monica Davey keeps on writing about the struggling city, with a piece today about “Detroit Ruin.” The city is building a database, with pictures, of Detroit’s abandoned properties.

Everyone here has long known that Detroit is plagued by emptying neighborhoods, but this expedited, top-to-bottom analysis of all 380,217 parcels of land in the city, which is to be finished in a matter of weeks, will quantify the state of blight here with a level of detail rare for an American city.

The survey is costing $1.5 million, donated by foundations and private sources, will be used to inform the work of the Blight Removal Task Force (issuing recommendations sometime in the next couple of months). Somewhere between 70,000 and 90,000 buildings in Detroit are estimated to be vacant. Mayor Bing’s efforts to demolish just 10,000 buildings struggled to get off the ground. Private foundations seem to think they can do better (which depends on your definition of “better” and also of “democracy”). The non-profit Detroit Blight Authority set out to help Bing accomplish some blight demonstration projects, but Bing’s energy for shrinking Detroit eventually succumbed to the city’s emergency takeover and eventual bankruptcy.

The Blight Removal Task Force is headed by, among others, Dan Gilbert, owner of Quicken Loans, and the man who’s been buying up Detroit property (that’s a whole other article). I remember a bit from my economics classes about supply and demand, and it makes good business sense that a man who controls much of the supply of Detroit property would be interested in demolishing what he doesn’t control. There is also some tragic irony in the fact that many of these homes might have been abandoned by folks who just couldn’t keep paying the loans held by Mr. Gilbert’s company, Quicken Loans Inc.

Anyway, it will be interesting to see how this database shapes up, and how the process of “shrinking Detroit” reshapes itself through the bankruptcy and beyond.

« How much income do you need to buy a home in the Bay Area?» Woops!