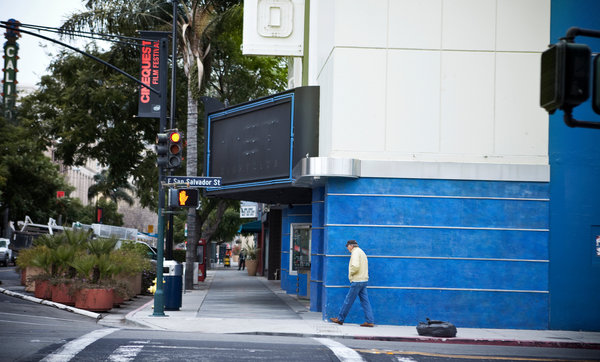 San Jose, Calif., which calls itself the capital of Silicon Valley and has grown to become the nation’s 10th biggest city, has had to shed more than a fifth of its workers in recent years to save money. It is, in a way, a microcosm of the nation, which has lost 668,000 state and local government jobs since the recession hit — making it harder to provide services and upending the lives of thousands of people who have lost their jobs.

The photo essay shows a $90 million police building and four new public libraries that the city can’t afford to open. Revenues fell in 2008 and are only slowly creeping back to levels of five years ago.

The article spends the last few paragraphs on the pension question – “Pension costs now consume more than a fifth of the city’s general fund budget, officials said, and have risen to $245 million this year from $73 million a decade ago” – the ubiquitous debate at the core of city budget cutting. I’m still learning more about how pensions work, and it’s becoming obvious that to understand conversations like these I need to learn a lot faster. Why are pension costs skyrocketing, and how much of that is coming from the general fund via other revenue sources, and how much from employee contributions?

The article also includes a couple of graphics from the Nelson A. Rockefeller Institute of Government, which tracks revenues and layoffs in the public sector. The most surprising shows the difference between public employment in five recessions, starting with 1973. Only the current recession sees a steady (and continuing, from the looks of it) decline in public employment, apart from a little upward curve early on.

The Institute has a lot more data, including state-specific numbers and some particularly bleak charts about local education employment.

« In Alabama, a County That Fell Off the Financial Cliff» Detroit Must Cut Income Taxes, Worsening Crumbling Tax Base