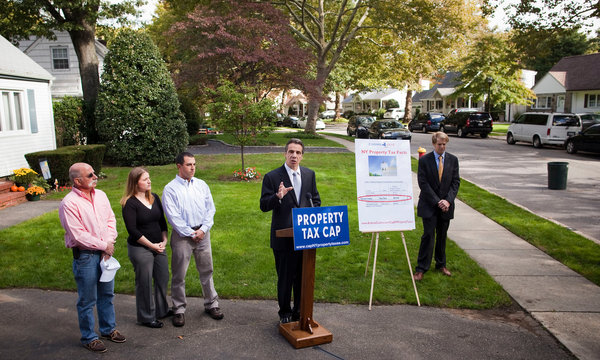 A much-heralded cap on property taxes championed by Gov. Andrew M. Cuomo is encountering resistance as some communities across New York chafe at what amounts to a restriction on their spending and seek to exempt themselves from the new limits.

This article ran back in October, but it highlights an issue that people don’t often pay attention to: the power that states have to control the overall revenue structure of government and thereby strongly influence how services are provided at all levels. The Governor’s spin on it emphasizes the need to protect taxpayers from rampant property tax increases (a similar rhetoric justified Proposition 13 in California, which now hamstrings local governments).

But Mr. Cuomo is now emphasizing the cap’s symbolic value, saying “this mentality of automatic pilot, where the property taxes just keep going up 5, 6, 7 percent every year,” will no longer be tolerated by New Yorkers. Indeed, in some communities, residents have chastised their local officials for not sufficiently embracing his push to keep taxes down.

“What you’re seeing this year, which you didn’t see in years past: there is much more attention and discussion about the increases in the property tax,” Mr. Cuomo said. “That is a great accomplishment and a great positive.”

But in an era of state budget cuts, and an unwillingness of many legislators (local, state, or federal) to raise any taxes, the implications of such moves on local services can be dire.