The attack on government

An interesting issue about the conservative attack on government as an idea: by Demos and the American Prospect. Features stories Wisconsin, Connecticut, Florida, New York, and a feature on pensions. These battles at the state level are, of course, echoing in city halls. Even if the debates seem less heated and the stakes not as high, what gets lost in the state house is ultimately felt in the city.

Privatization – how is it debated? 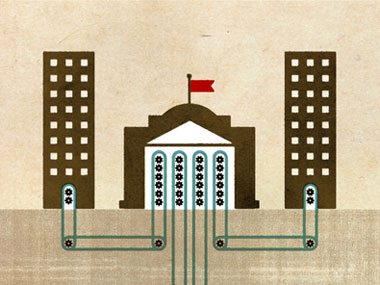 How does the mortgage and foreclosure crisis compare to the Great Depression in photogeneity? Nice article here, with some great links to jump to.

An analysis of 122 audits of state economic development programs in 44 states reveals a troubling policy landscape. In a time when these programs – such as tax breaks, grants, and loans – are rapidly proliferating, many audits reveal that taxpayers are getting a poor bang for their buck.

Over the last decade, auditors have repeatedly found primitive oversight by development agencies, including failures to monitor companies that have received development subsidies to determine if they have met their performance goals. In a version of “garbage in, garbage out,” many auditors have found state agency data to be so poor or unverified as to effectively preclude program evaluation.

Other audits have found that agencies and/or programs lack formal goals or benchmarks – that is, no measure of success or failure – so that even if an agency has collected the required data, there is no way to evaluate what the information means. And perhaps most disheartening, the few audits that do evaluate effectiveness find little evidence that development programs are affecting economic conditions in the states.

Worse, some audits find that development agencies are an easy mark, tolerating sky-high loan default rates, awarding grants and loans to companies that have failed to fulfill their performance obligations, or even committing ethical breaches that provoke criminal investigations. Our review also led to conclusions about the state of performance evaluation in the states. We are struck first that few audits evaluate a program or agency’s effectiveness. At its core, an audit should also be a cost-benefit analysis focused on what the public is getting for its dollar. Most of the audits we reviewed do a poor job of determining effectiveness – in large part because they are hampered by lack of data and objectives – and most fail to compare any of their findings about
outcomes to a program’s costs.

Second, we find that performance audits of development programs are conducted far too infrequently. Although financial and compliance audits are done regularly in nearly every state, evaluations of performance are rare. Only 17 states subject agencies to regular performance auditing. We estimate that in those states that do not, development programs are only audited about once every 15 years. Given the rapidly-changing nature of the U.S. economy and the need for development strategies to adapt to those changes, such infrequent audits are clearly inadequate.

Since No More Candy Store was published in 1994, the grassroots movement to reform economic development has continued to surge.

Why has the campaign to stop the abuse of development subsidies blossomed? Because the state-eat-state civil war for jobs has continued, making subsidies ubiquitous. Any company that has been awake the last 15 years and has built a new facility has probably gotten tax breaks – even companies merely moving jobs from one place to another. And the corporate practice of demanding subsidies for an existing facility by threatening to leave or expand elsewhere – commonly dubbed “job blackmail” – has become a fine art.

Subsidies have become such an automatic “gimmee,” they have changed the whole rationale public officials use to justify them. No longer do public officials speak of “leveraging” private investment with public dollars; that is, bringing jobs to areas that have been redlined by banks or polluted. Now, officials simply speak of being “competitive;” in other words, they justify offering subsidies simply because other places do.

The costs per job boggle the mind. Many states now have dozens of deals on the books in excess of $100,000 per job. We once interviewed a plastics company that had been offered subsidies totaling $469,000 per job. The company spokesman basically shrugged and said it was just an “off-the-shelf” deal.

And the total costs are enormous. In his new book, Competing for Capital, Professor Kenneth Thomas estimates that as of 1996, states, counties and cities were already spending $48.8 billion a year on economic development! Most significantly, he finds that grassroots organizing by non-profit groups is leading the way to reform. Comparing the United States to Canada and Europe, Professor Thomas concludes that “…the real story of attempts to control subsidies to investment in the United States is one about nongovernmental organizations and their organizing efforts.”